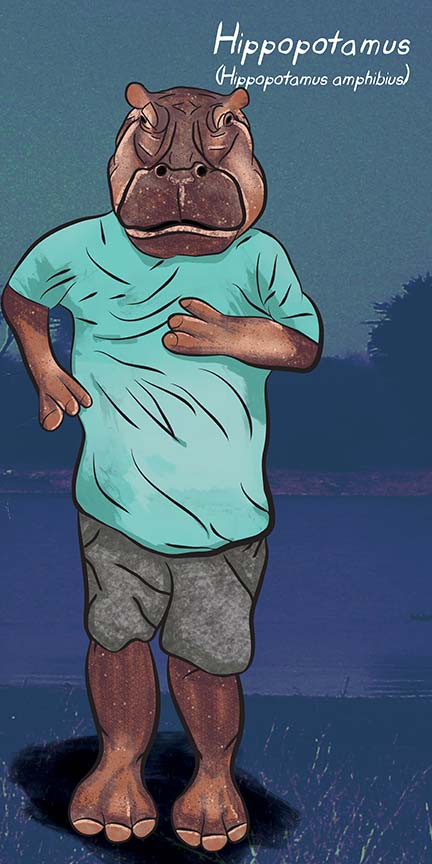 “Hippopotamus” comes from the Greek word meaning “river horse.” Like horses, they are ungulates (have hooves), are quadrupeds (walk on four legs), and are pretty descent runners: their top speed is 30 mph, where the fastest human in the world can run about 29 mph. But that is where the similarities end.

For one thing, hippos spend most of their time in the water because they don’t have true sweat glands. When they get hot–and that’s much of the time, since they are indigenous to Africa–they secrete a red mucus from their skin which resembles blood. They try to avoid this by staying cool in the water because it’s gross and freaks everyone out.

Hippos are social creatures and live in big herds. However, they are very aggressive and sensitive about their red blood mucus and weight problems, so they get into fights. When you see a hippo yawn, it’s not actually tired: it’s showing off its teeth to another hippo, as if to say, “Hey, look at how big my teeth are. I’m tired of you calling me fat. It makes me feel sad. I can bite you and you might die.” When humans see this behavior, they think, “Aw cute! He’s yawing. I wonder how much money I could get from those ivory teeth in his mouth. I think I’ll kill him and find out.”

Just another reason why animals are sometimes better than people: they are sensitive and we are dumb.